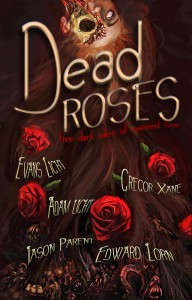 Following hot on the heels of last year's Bad Apples: Five Slices of Halloween Horror, Parent, Lorn, Xane and the Brothers Light have again come together with five short stories this time thematically linked by the idea of love. All bring something compelling to the table, and each is unique insofar as offering at least one thing you'd be hard pressed to find elsewhere. Better still, all are exceptionally well-written and the pages genuinely fly by. I could scarcely believe how quickly I devoured this collection, such was the strength of the prose and the eagerness I felt to read "just one page more".

ELEANOR by Jason Parent kicks things off in style, with a special spin on the idea of forbidden love between a priest in the Catholic church and his disfigured adopted daughter. It's explicit and unsettling and all the more powerful for both of these qualities. It also sets up the rest of the collection perfectly.

The fantastically titled LOVE LIES IN EYES by Evans Light is probably the most accessible of the five stories, telling a very simple tale that emphasises the fickle nature of love with a supernatural twist. The set up means there are few surprises in this one, but it does come to a very satisfying conclusion that adds further evidence to that old saying about a woman scorned ...

Adam Light's PANACEA is the most horrific of the five tales and for that reason it readily appealed to this reader. You know without a shadow of a doubt that the miracle cure Rob offers to his cancer-riddled wife is going to end badly, but I doubt many people will see exactly where Light is heading with this until he gets there. Basically, this was a top notch, nasty story.

I have to admit to being surprised that a tale from the word processor of Edward Lorn would be so short, but CINDER BLOCK manages to be both sharp and to the point while leaving much for the reader to ponder about how we learn what love is.

And finally, there is Gregor Xane's LOVING THE GOAT. Let's just start with an acknowledgement that this one is way, way out there. It's by far the longest (actually being more of a novella than short story) and would be more accurately labelled bizarro than horror. But it is decidedly dark, and if you can get past the difficulties I had liking the protagonist (given what he does), then there is quite the strange and oddly compelling journey to be had.

All in all, I probably did not enjoy this one quite as much as I did Bad Apples: Five Slices of Halloween Horror, but I still got a hell of a kick out of it. Given Dead Roses was out almost in time for Valentine's Day, I'm going to go right ahead and assume we can expect more holiday-themed collections from the authors in the very near future. The mind boggles wondering what they could do with a Thanksgiving collection, or one based around Independence Day ...

This review is based on a free copy provided by Jason Parent, who did not even want an honest review in exchange for it. Well, he got one anyway!
Horror bizarro monsters dark fiction
Source: http://www.goodreads.com/review/show/1201242783
Tweet